This should be a lengthy update this week. I had 5/6 days go really well so lots of things to report. This was our first week back to school after the internship I did at Panerai. Our goal now in school is to get our W-01 watches running and ready for the COSC certification. We have to send the watches in at the end of February so we don't have much time.

The first thing I started with was putting in a bronze bearing on the barrel bridge for the W-01. I had already put one in on the mainplate and needed to finish the bridge. I also did the perlage to the underside of the bridge. I didn't take any pictures of that but it doesn't look much different than the other bridges. After this was complete I only have the balance staff to make and the stud holder (which doesn't have a final design yet) and the Breguet overcoil hairspring and I will have a running watch. Considering I have almost everything done (except those few small things) I got to work on my AMS1 a little bit.

A while back I had an idea that I could do Geneva stripes on the Schaublin 70. Geneva stripes (or waves) is a pattern that creates the illusion of a waved surface on the flat surfaces. It's not the most complicated to do, but if done properly it is much more difficult. The goal is to leave marks on the surface and not create big steps from one side of the stripe to the next stripe. If you look up close at even some of the expensive watches you will see big steps and it's not so nice. Here is an example of perfect geneva stripes on the Phillipe Dufour Simplicity watch. If you look at the side views of the bridge you can't see any wave in the bevel. If you look at some of the other well known brands up close you can see the quality isn't even close to this good.

So I set out to achieve something close to ideal, but accepting I might not be able to get it perfect. I figured I could use the milling attachment and with the right tool set to the right angle I could do it. So Tuesday I set out to see if I could get a good result. I only had a rough idea of how the professionals (like Phillipe Dufour, Vianney Halter and Kari Voutilainen to name a few) do it. I tried using diamond paper on some flexible plastic like I was told it was done, but I had not so good results. I tried different speeds and angles but nothing was giving me the right result. Plus this was all based on a partial guess of how it was supposed to be done.

Then I set up a stone in the milling attachment and after tweaking with the angle for quite some time and a lot of trials, I finally got something I think would be acceptable to put on my watch. Here are some pictures to show the result so far. 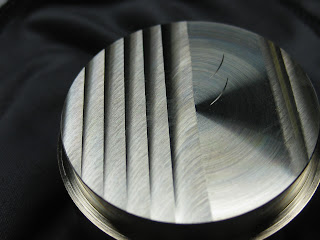 I also had some advice from my instructors friend Enrico (might have spelled that wrong) who used to work at Vianney Halter. So thanks to him for stopping by and giving his advice and opinions. 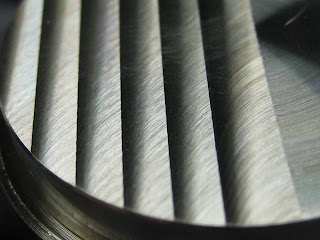 I had first tested everything on brass, but I figured I'd better try it on German silver since that what my bridges are made from. It's still not perfect but with a little bit of tweaking I think it will look as close as possible. 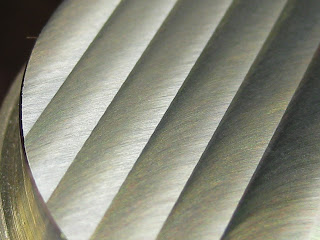 You can see from the side view that there is not much of a wave in the bevel. If you see an ETA watch up close sometime look at how deep the waves are! 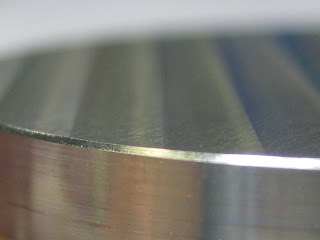 The bevel is still nice and straight! 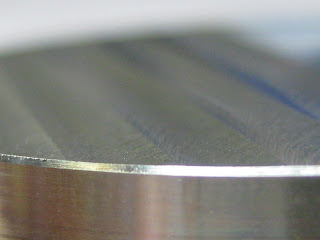 I also have to make a support for when I actually do my bridges. The bridges have to be almost perfectly flat before making the stripes and I need to support the weak part of the bridges so they do not flex and create a funny pattern. But I have a lot of other things to do before I need to worry about that...

Next thing I worked on was another design and finish aspect. As you might know I really like the design of the A. Lange & Sohne watches. One thing I really like is the engraved balance bridge. I thought if it's not too crazy expensive, I could get mine engraved. So I drew up a pattern I think is pretty cool and interesting. My instructor knows a really good engraver who might be able to do it for me. Here's her website by the way: http://gravalance.ch/. She does some really nice work, hopefully it works out! 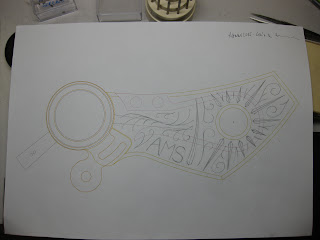 Another thing I started working on was the dial. Since my watch is not a traditional design with the hour and minute in the center, I have to make my own dial. I tested some things out a while ago and found a really nice finish with sandblasting brass and coating it with the black rhodium. So I am trying to make my dial out of brass. Usually the dial feet are soldered onto the dial after, but I am going to try to mill them out of the full material. I think they will be a little more solid that way. Anyways, I flattened one side and then glued it to my milling block. Then I milled the feet out and also drilled the holes for the pivots, and milled out the moon phase window. Then since I left a lot of material on the other side I had to flip it over and mill the rest off. This turned out to be a not so hot idea. I am not 100% sure, but I think the aggressive action of the milling caused the dial to be warped. It is only 0.60mm thick so that doesn't help. I tried to flatten it but it just didn't work out. So now I am trying a slightly different approach, crossing my fingers it works. I don't really want to increase the thickness that much so I'll try to figure something out. But here is a picture of the underside of the dial. One good thing is that I can use this one to test the finishings on it! 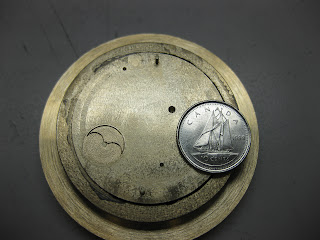 After that I decided to finish an old project I started a while back. The project is a collet holder for the 8mm Schaublin collets. I had done the top part that holds the collet a long time ago but we didn't have the tap to thread the screw for the collet. We finally got it a while back so I just drilled and tapped the piece and it was done. Only an hour of work to finish it. It's a very handy tool though and will be nice to have. I guess I need to get some collets to actually use it! 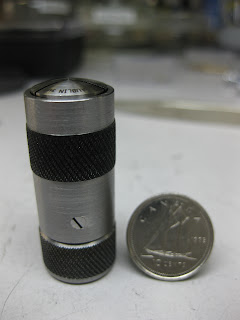 Then I set out to make another (hopefully the last!) pallet fork bridge. I had the other one from the previous setup but when I put it on the mainplate I made, the jewel of the bridge was not aligned close enough with the one in the mainplate. And since I didn't want to put in a larger jewel, making a new one was the only solution. So I milled it out, hardened and tempered it and then set it up to center the hole for the jewel. And just to show how accurate you have to be when making this hole here is an explanation. The jewel is exactly 1.000mm in diameter. Depending on the material you are pushing the jewel into, the hole has to be 0.005-0.010mm smaller than the jewel diameter. With steel, it has to be about 0.005mm less. It's not that easy to measure at this dimension. I thought I had the hole to about 0.992 or 0.993mm. But when I tried to push the jewel in, it just cracked. So i had to take off another 1-2 microns of material so it would push in nicely, but not be too loose. Here you can see the difference between a few microns of material! 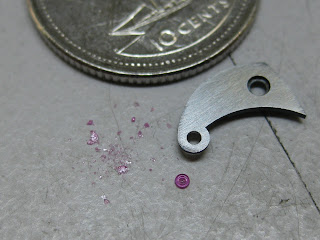 I now have the bridges done up to the balance. 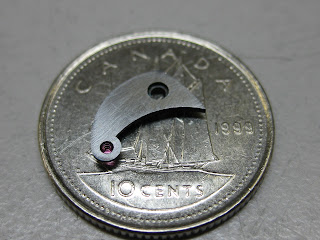 We also got the pinions for the wheels  so I was able to rivet the 3rd and fourth wheel for the W-01, and also the 3rd wheel for the AMS1. For the 4th wheel on the AMS1 I had to do something different for the pinion. Since I added almost 1.50mm to the dial side of the mainplate, the original 4th wheel pinion wouldn't be long enough to extend through to the dial. So what I though would work was to make a longer pivot and push it onto part of the original one. The pictures show a little better what I'm talking about. It was quite a nerving experience though because I had to rivet the pinion onto the wheel first, and then push that extra piece on after. Then if it was not running straight I wouldn't have a way of removing it and the nice wheel I already beveled and plated would be unusable. But everything worked out and it runs really straight and flat. A big moment this week! 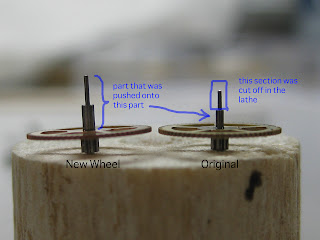 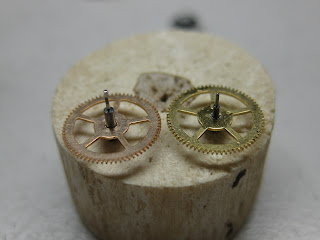 I think the wheels are quite a bit nicer now that they are beveled and plated. 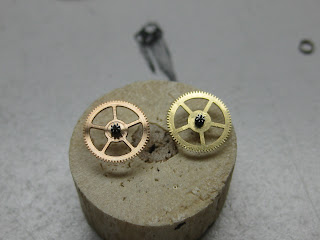 Then on Saturday I set out to make the click spring and click and get them to work. First I milled out the springs (I made one extra) in the M1, then hardened and tempered them. 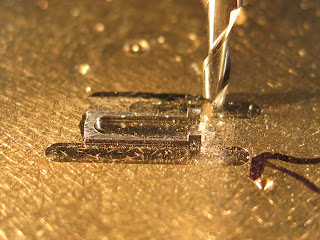 Here you can see how small the spring is. And it isn't just flat either, it has to extend into the click. 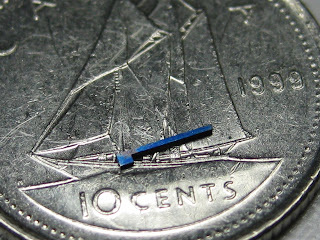 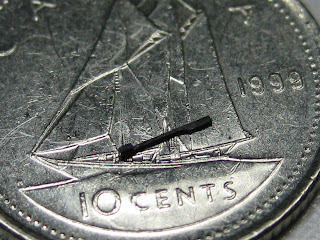 Then I had to adjust slightly to make it fit into the slot I had cut out in the bridge and in the click. 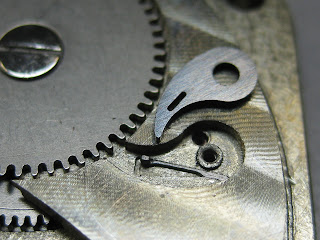 And here you can see the click set in and the spring is not visible. I also had to adjust the thickness of the spring because the tension was a little bit too much at first. But now it is working great. And I think it looks pretty cool! At least much better than the original 6498 click... 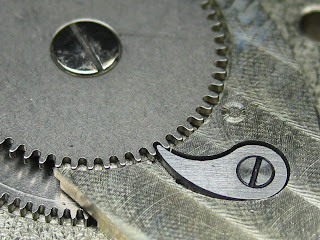 And lastly here is a picture of the gear train with and without the bridges on. I think it looks pretty awesome, even without it being finished nicely yet! 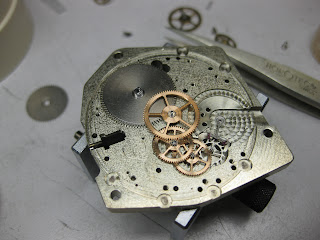 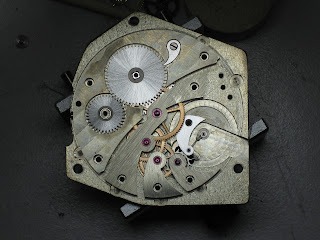 Now I just have to get the balance bridge milled out. Should be close by the end of next week. Hopefully I can have more weeks like that one. I think it was the best week I have had since I started this project!
Posted by Aaron Sarauer at 6:40 PM